Get ready for a wild ride on Episode 246 of The Rich Dickman Show, “Chinese Pearl Harbor”! Join host Rem Dickman and his crew of colorful characters as they tackle a variety of topics, from Cody’s adventures in Arizona to Randy’s mind-blowing gambling tale. Rem gives us a glimpse into the strange world of medicinal names in CT, and Svenson makes a comeback with a bang. Matty from Australia joins in on the fun with a call, and Rem takes a shot at history, but not without a dose of humor. Cody has a sausage tale that will have you laughing out loud, and Randy is zenned out in this episode. Plus, the 19th law of power is reviewed and much more. Don’t miss out on this episode of The Rich Dickman Show 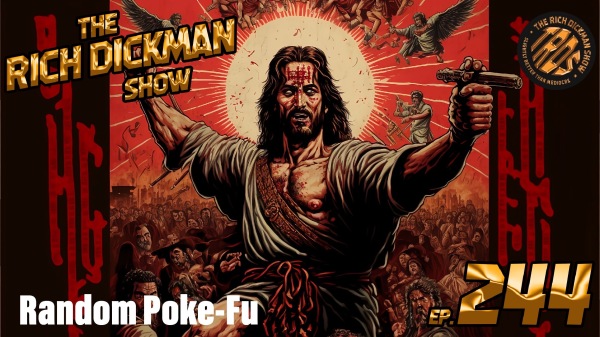 On The Rich Dickman Show Episode 244: Random Poke-Fu, the group discusses a variety of topics including the revival of 90s words, the Transformers franchise, firework wars in Hawaii, smuggling gold to avoid taxes, and how to handle an inherited treasure map. The show also covers job promotion woes and mentions several people or groups including DOTW, Elon, Trump, Meth Heads, the LA Clippers, Joacim from Brockport, and Rem’s security guy. There is also a segment on Damar Hamlin and a recount of a phone conversation between Rem and Randy. The show includes an AI Out of Context segment from a Christmas special covering Frosty the Snowman, envelopes, slackers, a poem, and a wife banger. The show ends with a discussion on a Jesus AI art segment, Jesus vs. a giant Japanese fighting robot, Dickman Con 2023, and Mecha Jesus.

It seems like Episode 243: He Who Is Without Sith is a mix of various topics and discussions. The episode begins with Randy and Cody sharing their experiences with food, with Randy having a controversial lava crunch cake and Cody having a horror story about them. Rem is mentioned as hating crunch cakes and eggs. The group then receives a letter from Rich Dickman giving Randy the Dickman Award for Excellence. Rem is also shown to be fawning over Wagyu and not wanting to go to Arby’s.

The episode also includes a discussion about Jesus Christ AI art, with Cody talking about Mac and cheese and a breakfast burrito in great detail. Rem is mentioned as getting drunk at the in-laws’ and becoming the Grinch. The group also helps someone pick a vacation destination and Randy brings politics into the conversation by discussing beer and Cody gives advice on how to enjoy Beerfest.

The group also offers advice on how to pick a phone case and debates various “Dicks of the Week,” including The Cops, The Child Labor Board, NFTs, Rem’s wife, and Randy. The show also includes The 48 Laws Of Power Segment on the idea that scarcity can make someone more valuable and give them an aura. The AI Out of Context segment includes mentions of generic white people, cream of mushroom soup, and effective jellyfish use. Rem is also shown to rant about ridiculous results in the Republic. 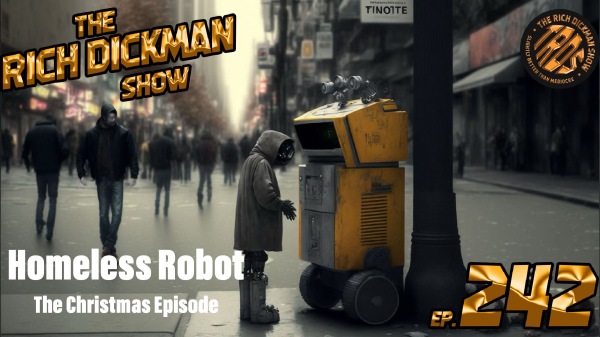 The Rich Dickman Show Episode 242, also known as  “Homeless Robot,” was a jam-packed episode filled with a variety of topics and discussions. The show began with a catch-up on the SBF saga, and the hosts brought up the genius of Norm McDonald and his many funny jokes. Rem pitched a pivot for the show after episode 301, and the hosts covered how to look busy when your boss gives you nothing to do. They also gave advice on what to do when your chair is uncomfortable.

The show then turned to a discussion of Rick and Morty and the legalization of cannabis in Connecticut. Randy went deep on his tenure at Taco Bell after Rem had a bad experience there. The hosts also talked about a cop in Iowa who asked for 90 machine guns for just three people and the strange phenomenon of “dognappers.” Rem talked about restoration channels on YouTube, while Cody reflected on giving his toys away.

The show continued with Rem sharing a magical Christmas wish about politics and a discussion on whether it will be “The Gun Dealer,” “The Dognappers,” “The Frenchman,” or “The Florida Man” for Dick of the Week. There was also a segment on AI without context with a random voice from episode 42. Rem accused Mariah Carey of some shit, and Randy died during the “48 LOP” segment. Rem and Cody also talked about massages in exotic places, and Svenson wanted the hosts to discuss separating the art from the artist.

Towards the end of the episode, Rem read an ad for the National Wrestling Alliance and declared himself bulletproof against his family’s sickness. The hosts made Christmas wishes for next year, and Cody rebuffed Rem’s offer to help him with his culinary skills. The show finally came to a close after a diverse and entertaining episode.

In this episode of The Rich Dickman Show, Jock Samson joins the hosts to discuss wrestling, drinking Crown Royal, and the behaviors of wealthy people. The conversation also touches on troubleshooting a listener’s computer issues, Cody’s admiration for Randy, and the negative effects of tying credit to housing. The host, Rem, expresses frustration with people who don’t make enough money and licks the boots of Elon Musk. The group also discusses AI without context and the creation of “Dick of the week” from “Idiot of the week” thanks to Svenson. The dark side of Bob Ross is also mentioned. RIP. 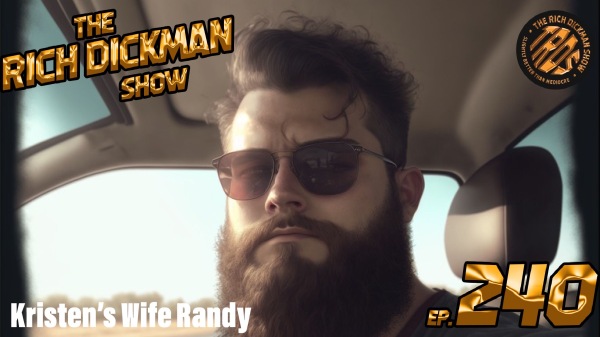 Join us for Episode 240 of The Rich Dickman Show Podcast, where we cover a range of topics, including how to cut sandwiches, Cody’s dislike of surprises, and an interview with AJ from Cincy Wrestling. We also discuss gimmick matches, Cincy Wrestling’s upcoming event in Lawerenceburg on March 10, 2023, and Rem’s family photo plans. Other topics include Cody’s Mom’s Island, AI and cannabis, and what Jhun-Yi should eat for dinner. The episode also covers stealing guac, the “dick of the week,” and offering hugs before knifing someone with Law 12. In addition, Randy surprises Cody with a new MechaCody, Cody pitches a Netflix series, and Cody’s mom gets a new pig-killing dog. Don’t miss it! 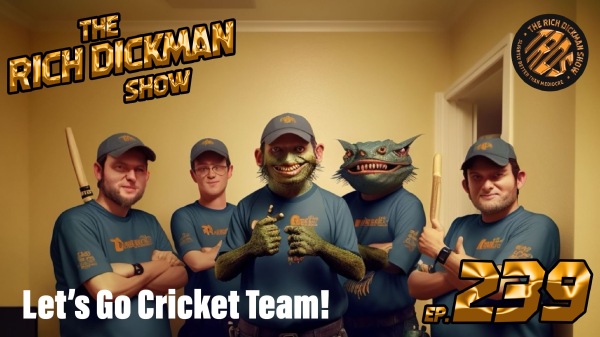 It’s Cody’s Birthday Show and we didn’t go all out. Cody runs the vacuum while Rem defends himself against Matt from NFHC. Cody is proud of Randy…for a second, and Randy has gifts – new bumpers! Randy mistakenly spells “shit” right, so we discuss making AI bots to carry on the podcast. McDonald’s messes Alexa up, and we learn not to mess with Taylor Swift as we give AI a shot at the intro. Cody gets a Steam deck to play Half Life 2 while Randy tries to pass school uniforms as a prank; Rem messes with his son, and Stephen who hides a spider and makes people pee their pants! A math major needs help with an avocado problem – avocados are from Mexico – but Rem saves the segment without answering it. Take calculator 55378008 and turn it upside down; then solve this complicated problem about rats that has Cody being quite dickish for 20 minutes before Stephen addresses crypto situation & Epstein didn’t Epstein himself (the literal devil does VO for our new bumper). Learn how keeping people dependent on you gives power & Matty watches cricket with money on line before Steve Irwin’s Drop Bear Episode discussion ensues followed by Cocaine Bear talk & Pidgins carrying molley in NYC where Svenson weighs in with great comment before Cody gets gift while teaching Rem Buddhism to end the show.

The Following Episode Description Was Written Entirely By AI:

We’re here today to talk about thankful things. And we have an amazing show lined up for you. We’ve got Cody giving thanks for air conditioning, Rem thanking his family reunion and Rich Dickman thanking FTX.

But first, we’re going to get into some news:

Rich Dickman got hit hard by FTX last week. He was expecting a little bit more stability in his life and ended up getting some really bad news. That doesn’t mean he’s not thankful for what he has though! He talks about how grateful he is for all of his friends and family members who support him throughout the year (even if they don’t always understand what he does).

The show continues with Rem thanking the smelliest poo ever that someone left on their car seat at the airport. It was so bad that Rem couldn’t stop smelling it for hours after leaving the airport.

Then we continue with Cody thanking English Murder Mysteries for culture—and asking why Americans don’t watch them at home when there are so many other great shows out there available on Netflix or Amazon Prime Video! Then we get into Svenson answering calls from toilet seats and demanding citations from Numchucks fans. 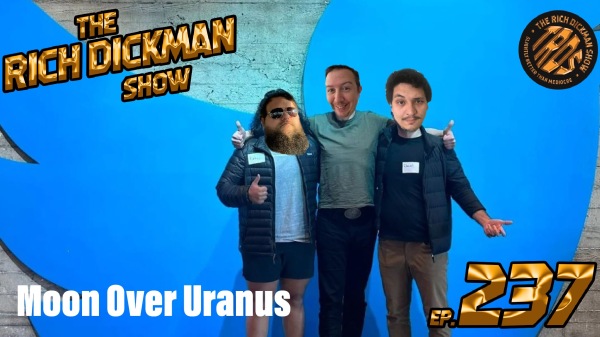 Is this a top five episode of TRDS? Yes, it most definitely is – You don’t want to miss this one!

Promotion Watch 2022 – Update; Randy creates a new segment – AI Out Of Context; How Many Testicles Does The Average Human Have?; Does Elon Know What He’s Doing With Twitter?; Law of Power #9; Celebrating 5 Years of NFHC; Randy took a trip to Michigan; Rem took a trip to Taco Bell; Cody graces us with knowledge; and get your silly ass ready to laugh – because there’s a bunch coming! Tell your friends, get in there, and enjoy!